Before you think that this is some post about a love interest between a student nurse and a doctor I might just as well inform you beforehand that this is not what you're thinking. Besides the student nurse me and the doctor is a guy so definitely no. this is an experience that I would want to share with you guys. 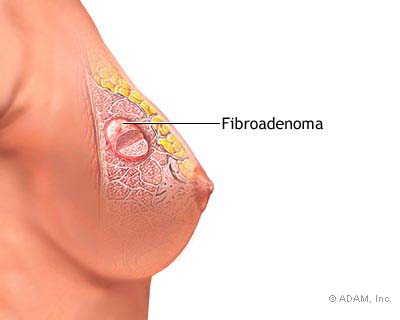 I always get jittery whenever doctors are around, but being on duty at the operating room even made things worst and I was very jumpy. The doctors in the operating room were very nice and I was a bit at ease but I was also nervous because it was my first time to scrub-in in an actual operation. The surgical procedure was only a minor case, just an excision of a fibroadenoma at the left breast. A fibroadenoma is a non-cancerous benign lump that is found in breast tissue. When felt under the skin, the lump may feel rubbery and easily moveable within the breast tissue. Fibroadenomas are commonly found in young women during their reproductive years (New York Times). It's caused by normal estrogenic fluctuations (Wikipedia) and it could be removed with out any worries.

The tumor looked like this when removed. The surgeon was very skillful! Even with lacking instruments (the operation wasn't held in the main hospital mind) he was able to make use of his fingers and got that tumor our perfectly! What even made this doctor, Dr. Perez, even more amazing is that he took nursing as his pre-med course! Wow that is really amazing! I even learned a lot from him and he was so nice and showed me a cosmetic style of suturing so that scarring could be put to a minimum. What did I tell you? Amazing!

Well I was very lucky that I was around very understanding doctors because I was stuttering (oh I hate myself) and I was being jumpy! Imagine? I called the doctor Ma'am! And the doctor was a guy! Oh oh... good thing the conversation was about a female clinical instructor at Xavier University. Ooh I am so dead!

Thinking of the things I did that they makes me want to kill myself. The doctor was talking to my colleague and I interrupted their conversation because I needed more suture (I was the scrub nurse so I was sterile). Oops, sorry doc! I did not notice that you guys had a conversation (why didn't I ask my other colleagues instead?).

Ooh I am such a mess! But at least the operation was a success and it was all thanks to Dr. Perez! hehehe.

But a thought comes into my mind. Why do doctors want to be called Doctor and not sir? Isn't sir a sign of respect? But maybe it's because the word "sir" is equated to nurses and patients. Oh now I get it hehehe. ^_^
at April 30, 2008