Boxing Day sure was crazy! We didn`t even bother going to the mall and other retail stores because all those places were jam-packed with people looking for good deals. We didn`t want to risk being killed in a stampede so we settled to spend our Boxing Day shopping around for decorations for our house like decorative planters. Just one more month and we will be able to move into our new house so one wouldn`t be surprised how excited we are.

I could actually imagine our home now and how I would make it look more peaceful and relaxing. The best way to set the mood for chilling at home would be to add planters. I know, it`s not too hard to realize that I love plants. What can I say? Just seeing green plants has this soothing and calming effect on my nerves. I was planning on getting plastic plants but I decided that real living plants would look better and would give us the added benefit of cleaner, fresher air.

I also can't wait to do something about our backyard. We were really fortunate to grab a corner lot for our house so we have this huge backyard, which would look really ugly when spring comes because we weren't even able to add patches of grass and do the landscaping. It's just fortunate that we got garden planters for Christmas so we're definitely on the right track. 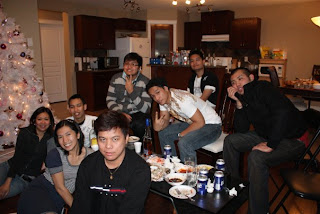 I have always been an antisocial and socially retarded but it helps that I have a job that requires social interactions and it's also great that I do have friends and family and I am not totally alone. "No man is an island," this is what my grade school teacher has always told me because during grade school I was the only guy in a 5-student class. It sucked that all my classmates were girls and they used to play these girly games and they wouldn't let me play. They would only let me play with them if I became "Ciara" and become one of them. Tsk tsk tsk... but I still love Del Monte School and my 4 female classmates. Imagine, we 5 were the only ones who graduated! Isn't that something?

Anyway, I did enjoy Judy's birthday party. I was able to catch up with old co-workers and we were talking about the good old days, ranting about work and people that pisses us off or people who used to piss us of. It's always good to break out from your daily routine and start feeling like a human again.

Judy's party was a blast. As usual, as any Filipino household would have, our main form of entertainment was the karaoke. Don't get me wrong, I love the karaoke even if I'm not that good at it. I've actually ordered one for myself just recently (damn my impulsive buying habits), well it's a gift for my mom and dad so it's worth it. 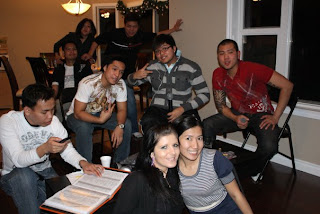 I have to thank Tyler for letting me go home earlier. Although I didn't get laid (I think he was thinking of another kind of party LOL) I still had fun. It was also great to see Elvira by the way. Speaking of Elvira, if you want to get a haircut go see her at Kaya Loma Salon and Spa. It was funny the way Elvira suddenly said "Go Bosnia! Go Bosnia!" when we were singing the lines of the song Bebot.

I wish that more people would have come but it was sort of a last minute thing and the other people had work. But I'm looking forward to more parties this coming days.

Damn that Jesse Fabia! He has the audacity to pick a fight with me! Me! Compared to me he is just a freaking fetus! An unaccomplished failure of a human being! How dare he slander me when I was showing compassion to a friend who was deeply wounded and was hurting. I wasn't interacting with him and I was in a private conversation when this scum butts in and tries to ruin my effing day!
Guess what you freaking douche bag, bring it on! I'm in the mood for a good fight. Damn him! I don't even know him and the only reason that we're acquainted was because of his stupid brother. It's not my fault that he and my best friend had to break up. Well I tried to break them up at first because I know that he was a sex-deprived freak, but it was my best friend who dumped his sorry piece of ass!

She dumped him out of her own free will, several months after I gave her the ultimatum to choose between me or him, which by the way she never chose anyone. But seriously that happened decades ago and he had to bring it up. Fucking retard!

I am pissed off because I was asking my best friend if her break-up with this other guy was true. I was in a state of shock because everyone thought that their relationship would lead to marriage.  Even I thought that they would get married straight after college because their relationship was  just perfect and beautiful. And then this vile human being (more like a troll) has to stick his ugly head and say, "sure bayot (gay)". What the hell is that? His comment was off-topic, offensive, and completely showed his limited range of vocabulary. Not to mention that his comment didn't make any sense at all and had bad sentence structure. Even a 10 year old could compose a more eloquent statement. But that idiot just failed miserably.

I know that I should have ignored him like we should all do to internet trolls but this was really personal so no, I will not back down and I will fight. I'm through being a goody-good-nice-fellow because I'll only end up as road kill. He wants war? Then I'll give him one he'll never forget. I'll make sure that my words would stick to his puny little brain until he takes his last breathe of air!

Reaching Out for Your Dreams

It is never too late for anyone to go back to school to pursue their careers that they really are passionate in. Take for example my friend who I used to work with before. She had a beauty career as a hairstylist before when she was still in Bosnia and now she is temporarily working at a fast-food joint in the mean time. Of course no one in their right minds would want to work in fast-food their entire life especially for a young lady in her 20's so she took the big step and enrolled in a beauty program. You may not believe it but hair dressers actually have to go to school to be able to cut your hair or make you look glamorous.
My friend actually wanted to follow in my foot steps and wanted to do something to improve her current lifestyle and she wants to do something that will actually make her happy. I totally support her plans and that's why I told her to check out school ratings to help her decide on what school to choose from. There are several schools out there but not every school offer a competitive and and sought-after programs.
I actually found my perfect match for a nursing school online as I was doing my college surfing. And at last I will be able to finally start my nursing program this coming January and I am really looking forward to it. With these huge steps that my friend and I took, we are closer to our dreams than what we have have hoped for.

Dark and Twisty Inside

Positive thoughts! Joy and sparkle! Reese chocolates! Yes you heard me right, I need chocolates and ice cream to make me happy. It's unfortunate that I have to turn to food for joy and comfort but I just can't help it if I suffer bouts of depression and self loath.

But I always bounce right back. Uh oh... don't tell me that my current work is becoming a flashback of effing Tim Hortons... nah it's just that I see douche bags wherever I go. Geez...

On the bright side, January is fast approaching and I'm pretty happy about that! I'm not excited of the holidays by the way since I work in retail so there's going to be plenty of Christmas shoppers and I'm not liking the sound of that. I could quit but seriously, working for 3 months then just quitting will really make my credit history shaky.

I actually just recently updated my Top 10 Posts list which is found here on the first column to the right of this blog entry.I selected my top 10 posts not on the basis of content and how well written it is but rather on the number of traffic that comes to my blog post.

Let's face it. It doesn't matter how good your writing style is or how vast your vocabulary because if your article doesn't grasp the interest of your reader then your post is an utter failure. With the help of Google Analytics I was able to determine my top post which is Macbook Pro 13 vs Dell Studio XPS 13. My top post used to be about overpopulation but I guess my most recent blog entry about choosing between my Dell and getting a new Macbook Pro sparked the interest of more people and has somehow received a better coverage. I actually decided to keep my Dell because I already received my Windows 7 Ultimate and that I didn't want to waste my money.

It's just too bad that my post about overpopulation was nudged out of my top 10 list because I really loved that post and even if it had poor editing it was still a post of substance and it's becoming more and more rare for me to recreate such a post.