A Few Minutes with Cheryl Brooks! 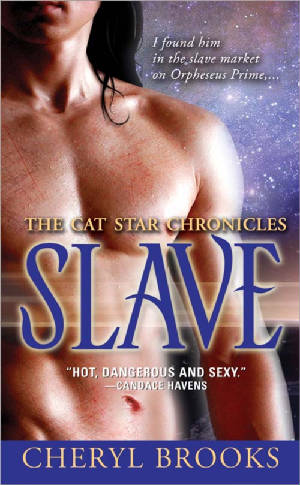 I was really surprised and excited when the lead publicist of Ms. Cheryl Brooks e-mailed me and told me that Ms. Brooks invited me for an interview with her. And what did I reply? Of course I'd say yes to such an awesome opportunity!
Ms. Brooks is a new paranormal romance author who by the way is also a night Critical Care Nurse. So she's a romance author by Day and then she's a Critical Care Nurse by night! How on earth could she balance her time, not to mention her energy?! She's really amazing. She has already written many unpublished novels but her debut novel that is very notable is SLAVE: The Cat Star Chronicles published by Sourcebooks Casablanca. And guess what she has five more upcoming novels in this series so we will definitely be seeing more of Ms. Cheryl Brooks.

I haven't read her novel yet (her publicist said she'll mail me a sample copy - yipee!) but I bet that it will really be interesting. They said that one should never judge a book by it's cover but I'm looking at the cover now and I think the cover speaks for itself how "Hot, Dangerous, and Sexy" this novel is.

Talk about being a superwoman. I really wonder how she could survive such a hectic schedule? Why not read this special interview I had with her to learn more of her:

*A Few Minutes with Cheryl Brooks*

Critical Care Nursing and Romance Writing seem like polar opposites. Was romance writing always a passion of yours?
I'm not sure that romance writing was always my passion, but I'm always fantasizing, and have been ever since I was a kid. Whenever I had to do something mundane or boring I'd come up with a storyline in my head and play it back just to have something better to think about. Eventually, I began writing them down.
Back in nursing school, what were some of your favorite romance novels to read? Did any of them inspire you to start writing your own?
I have always enjoyed the romantic suspense novels of Mary Stewart, as well as her Merlin trilogy. Her style has influenced me probably more than anyone's, but I'm also a big Georgette Heyer fan. I loved her humor most of all, but her heroes were very different from those I found in other books. Heyer's men were usually wealthy, but were also very human and sometimes a bit bumbling in their ways. They seemed so much more real to me than the stoic “Marlboro Man” type that I encountered in what a friend of mine used to call “Lust in the Dust” books. So often those men were too rough or arrogant for me—and had no sense of humor whatsoever! I like to laugh, and though I like a tough, sexy man as much as the next reader, many “heroes” I've read about are men I wouldn't even want to meet, let alone fall in love with, and my reaction to that was to make up my own heroes!

Do you think your writing has served as a way to “escape” the often hectic life of a nurse?
Any book can take you away from your current setting, but when you read, while you can use your own imagination up to a point, you are still at the mercy of the writer and you have to go where that person takes you. But writing a book can allow you to travel to any exotic locale you wish, do anything you've ever wanted to do, let you meet anyone you like, and fall in love with the most fabulous men you can dream up. Oh, of course! Reading.

Nurses can be put in extremely high stress situations and as a result, form close bonds and life-long friendships. Have any of your real-life relationships inspired those in your books?
The problem with branching out into a writing career has been that my best friends are all hospital workers, and though I'd love to be able to devote myself to writing full-time, leaving my nursing job would take me away from the best support network in the world! I work in a relatively small hospital, and I've met so many loving, caring people there! We're more like a family, and we know most of what is going on in each other's lives—and those who know that I write will often tell me things just so they might show up in a book someday! I've used many of my friends as characters in my novels, as well as their experiences, and they love it! Unfortunately, when it comes to their experiences with men, I've mostly used their bad ones! For example, a long-time friend and co-worker was lamenting one night that she'd give her right arm for a decent, honest, moral man, and I used that as a basis for the predicament that my heroine in the fourth book in The Cat Star Chronicles series finds herself in. Of course, the best part of being in a hospital setting is that, just when you think you've seen or heard it all, someone will prove you wrong!

You specifically write fantasy/science fiction romance. Has anything you’ve seen at work influenced some of the aliens, new species and environments you’ve created?
Actually, most of the sci-fi stuff comes out of my head, or from other books and films, but if you look closely, there's something “medical” in all of them. I've also written several novels (as yet unpublished) that aren't in the same genre as Slave, and many of them are about nurses. I have also written one novel for a respiratory therapist friend who loves cowboys. She wanted me to write a book about her, so I made her my heroine and gave her a whole bunk-house full of cowboys to choose from! I think that one is still her favorite.

Are there any similarities between critical care nursing and romance writing that you found surprising?
The stress! I thought I'd lower my stress level by being a writer instead of a nurse, but though the stress of being an author isn't life and death (and I have to remind myself of that on a regular basis!), I still carry it with me. A lot of what I do at the hospital I can leave behind when I clock out, but the writing thing follows me wherever I go, and I've probably lost more sleep because of my writing than I ever have as a nurse! However, when I've got an especially crazy patient driving me up the wall, or when the powers that be come up with some ridiculous new rule, writing for a living starts to look really, really good!