Somehow I really feel the Christmas spirit this December. Well my Christmas isn't that extravagant and all and I don't have as much gifts that I used to but somehow I still feel blessed.

I'm very happy even if we don't have that big dinner that we used to, the annual Christmas family reunion, or as I said my gifts. I'm happy because out of this simplicity and freedom from all the material things that people relate to Christmas I get to feel the real sense of Christmas and every other holidays. For me the most important thing is to be with my family and that is the best thing ever.

Yes, I still hate the carolers who are still persistent and would even wait several minutes waiting for you to give them money... speaking of the devil, a kid is saying "Pasko tag-balay" again... oh well, why not give him a little something right?

Anyway, I still love Christmas day even if a lot has changed. I'm surprised that I don't have the sleepless nights that I used to whenever I get too excited for Christmas. Even if I don't seem excited, Christmas will still be Christmas and I still love it.

I'll be waiting for New Year though, when I get to see on TV all the kids with their hands blown off, JUST KIDDING!!!! I'm not THAT evil hehehe. 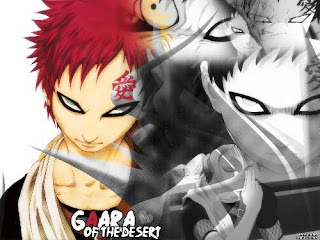 In Naruto, I really pity Gaara. He only grew up as a monster because the Hidden Village of Sand’s villagers treated him as one. He’s suffering from psychological problems because of the trauma he encounters daily with the villagers. His father is no good either as his father made him into what he is in the first place, a monster.

If you watch Naruto you would know what I am talking about and maybe feel what I’m feeling. Gaara really wanted to change and he wanted to live in peace with the people. The stupid people didn’t gave him the chance to change so I wouldn’t blame Gaara if he killed all of the villagers and enjoyed watching them die in pain slowly! Hahaha!!! 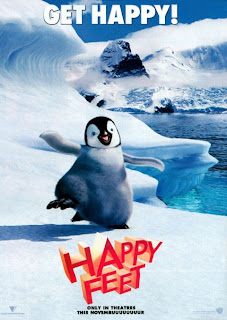 It was very fun watching Happy Feet with KC. It isn’t just a film for little children and it’s not just a plain film for entertainment. Underneath the pretty colors and comedic elements of the film are universal lessons and truths that we people tend to forget.

First. Let us protect the environment. We may be the smartest creatures on earth, but one reason for this intelligence is to safeguard the existence of every living creature here on earth. We only have one planet, one home, that is why it is so ironic to know that we are destroying this home.

Second. Just like in several films, Happy Feet embraces the quality of man as being unique and precious. People fear and even hate other people because they are different. That is why they treat these people badly and even to the point of hurting these people. They tag these different people as monsters, but what they don’t know is that these different people only become monsters because of the way people are treating them.

Third. Man is not finite. Man has many possibilities. People do change and sometimes for the better. We might call someone a loser but we may have to eat these words in the future because the person we called loser happened to be come a great somebody. Just like in Happy Feet. Mumble was different and they branded him as queer because he couldn’t sing and he could only dance. But this dancing that the elder penguins labeled as nonsense was the one that saved them all.

Living without a purpose is just like being dead. This is one lesson that I’ve learned in Naruto. While watching Naruto, I was able to feel the pain of solitude, the pain of being hated and thought of as not precious. But I have realized that the pain that I feel is not the same as Naruto’s and Gaara’s. I have people who loves me and who makes my existence worthwhile. Naruto and Gaara had no one at all.

We all need a purpose to live a happy and contented life, because if we don’t have a purpose in living, we would feel inadequate and we would just be walking, talking zombies.

I really hate Christmas Carolers! They have some nerve to go door to door and sing Christmas songs when we didn’t tell them to and then they even demand money! They are worst than beggars! There are even some carolers who give you these smirks of disappointment when you give them only one peso. I really want to slap them hard in the face. Who do they think they are? It’s not as if they gave us anything or made us happy with their pitiful songs. If I wanted to be entertained with Christmas songs, I would just turned on my CD player thank you. Caroling should be made illegal I tell you.
at December 20, 2006 No comments:

Email ThisBlogThis!Share to TwitterShare to FacebookShare to Pinterest
Labels: Hear Me Complain and Rant, Just Sharing, My Thoughts 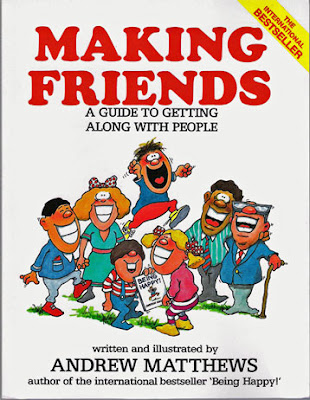 I know how friends are important and how being lonely is like. I thought that I didn't need friends that is why I could stay alone for months at home. But I then realized that I need not be lonely because I just didn't realized that I did have friends. I don't have friends as many as the sands and all of that but what really matters is that I have people who are precious to me and who consider me precious to them. It's not in how many friends you have, it's on the mere presence of a friend that really matters.

Yes! Finally, after long hours of slaving in front of a hot monitor (hehehe) I'm finally able to load my first audio blog. Now I can indulge myself more in being lazy! Joke. Yeah, technology is so cool.

I can now post stuff anywhere and anytime, especially those enlightenment periods that really last short and I often forget to post.
at December 09, 2006 No comments:

Failure Is The Best Eye Opener

Life is truly ironic... First you get praised and is told that you will have a great nurse. This fills your head up and you really believe that you are good to the point that you think that you are the best, but then you forget one thing... humility.

But failure is a good reminder that you should always keep your feet on the ground and that you really should try your best all the time. It's an eye opener, a sort of reminder telling you that you're on the wrong path. Failures are really humbling situations that could be tagged as defining moments.

The last return demonstration (cleaning the wound and applying a sterile dressing) was a defining moment for me and it had awakened me back to my senses.

Assisting in a Pap Smear

Last November 30, I went down to Cagayan de Oro because I was one of the eight endorsed by our clinical instructor's to assist in the Pap Smear at the Mother's House (An extension of German Doctors). I was quite excited and I have to admit that I had a bit of hepatomegalee episode (enlargement of the liver or bukad atay/burst of ego). Yeah it really felt good to be recognized because of your skills (char!).

I really thought that I could really experience a pap smear procedure but it was unfortunate that not one patient showed up. But at least I was able to take one client's vital signs (which I think I did ok). It was very fun though! I had fun talking to my team mates and it was cool to be able to share things with them.

We weren't able to gain some experience but we still have some incentives... incentives that I can't talk about because it would be a breach of secrecy. Hehehe...
at December 02, 2006 No comments:

I haven't been blogging lately. There can only be three reasons...

It's really more of the second reason... hehehe...

Anyway I really like reading other people's blog because it really gives me a glimpse of who they really are. It is really interesting. Anyway, I'll post a couple of things now.
at December 02, 2006 No comments: