I am 72 years old. My parents told me about Mr. Common Sense early in my
life and told me I would do well to call on him when making decisions.
It seems he was always around in my early years but less and less as
time passed until today I read his obituary.

Today we mourn the passing of a beloved old friend, Common Sense, who
has been with us for many years. No one knows for sure how old he was
since his birth records were long ago lost in bureaucratic red tape

He will be remembered as having cultivated such valuable lessons as
knowing when to come in out of the rain, why the early bird gets the
worm, life isn't always fair, and maybe it was my fault. Common Sense
lived by simple, sound finan cial policies (don't spend more than you
earn) and reliable parenting strategies (adults, not children are in
charge).

His health began to deteriorate rapidly when well intentioned but
overbearing regulations were set in place. Reports of a six-year-old boy
charged with sexual harassment for kissing a classmate; teens suspended
from school for using m outhwash after lunch; and a teacher fired for
reprimanding an unruly student , only worsened his condition.

Common Sense lost ground when parents attacked teachers for doing the
job they themselves failed to do in disciplining their unruly children.
It declined even further when schools were required to get parental
consent to administer Aspirin, sun lotion or a sticky plaster to a
student; but could not inform the parents when a student bec ame
pregnant and wanted to have an abortion.

Common Sense lost the will to live as the Ten Commandments became
contraband; churches became businesses; and criminals received better
treatment than their victims. Common Sense took a beating when you
couldn't defend yourself from a burglar in your own home and the burglar
can sue you for assault.

Common Sense finally gave up the will to live, after a woman failed to
realize that a steaming cup of coffee was hot. She spilled a little in
her lap, and was promptly awarded a huge settlement. Common Sense was
preceded in death by his parents, Truth and Trust; his wife, Discretion;
his daughter, Responsibility; and his son, Reason.

He is survived by three stepbrothers; I Know my Rights, Someone Else is
to Blame, and I'm a Victim.


Not many attended his funeral because so few realized he was gone. If
you still remember him pass this on. If not , join the majority and do
nothing.

The more clowns, the better the circus!

Because this is what Jesus, would freaking do!

One night I woke up crying and feeling that the whole world was against me and I really felt all alone and hurt. This was the first time in so many years that I have cried and had so much self-pity for myself. I blamed the world and asked why they hated me and wanted to hurt me when all the while I was trying my best to be good and to be friendly.

But I realized that I was only being selfish if I think this way that the world owes me anything. Turns out that I should not really expect anything in return from people because they themselves are hurt and broken. That is why they tend to hurt other people because they believe that this will somehow lift their hurt. But what they don't know is that they are adding more to their pain and that they are spreading their evil seeds around.

We all need is love. We need patience, understanding, and forgiveness. We shouldn't hate and put our selves down because this would only make us miserable.

We can't please everyone, but this doesn't mean that we should hate them for hating us... It's hard but the best way to be truly happy is to do what is right: "to love".

So if anyone asks you, "Why are you so nice to me despite all the things that I have done to you?" Reply, " Because this is what Jesus, would freaking do!"

I really like the video! The kid has some talent and is very creative! I really enjoyed watching it. It's simple, witty, and funny! 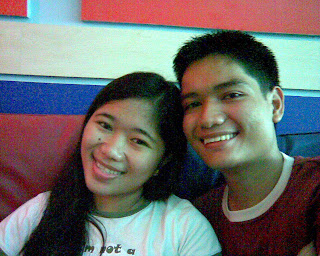 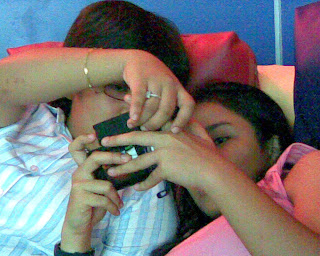 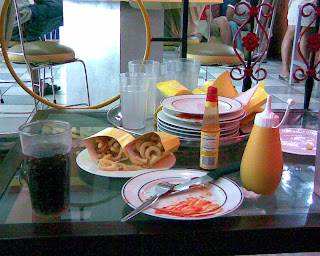 Here are some pics of our little get together at Pizza and Buns (I'm not sure of the name didn't really pay attention hehehe). I really enjoyed my self and we really got to eat a lot... little piggies hehehe...
at May 12, 2007 No comments:

New Generation of Nurses 'Too Posh to Wash"

New generation of nurses 'too posh to wash'

HARROGATE, England (Reuters) - A new generation of nurses who are "too posh to wash" are threatening traditional nursing practices by refusing to perform basic tasks, the leader of Britain's nurses' union, Beverly Malone, said Monday.

The changing status of women in society has made some nurses think they are above core activities like washing people's feet or backsides, Malone told a news conference at the Royal College of Nursing's (RCN) annual conference in Harrogate.

"Nursing in years gone by was associated with women's work and menial tasks, and women would only do certain levels of work relating to home care and babies' bottoms," she said.

"Women have moved up in the world and their status has changed. Now there is this assumption that if you become more professional then somehow you become too posh to wash."

The conference will discuss whether nurses should focus on treatment and technical nursing, leaving their caring role to less qualified health care assistants - a suggestion expected to be roundly defeated.

Nurses have taken on more specialized roles over recent years, including prescribing drugs and running chronic disease clinics. The conference voted Monday that nurses' managers should themselves be qualified nurses.

The RCN estimates that some 20 percent of junior doctors' work could be shifted to nurses and over 12 percent of nursing work given to health care assistants.

Jeremy Bore, a general nurse from Exeter in southern England, said he called for the debate because a significant minority of new nurses don't want to provide basic holistic care.

"I had a 10 minute debate with a student nurse who said, 'I do not wash people's bottoms, there are other people to do that,"' he said.

"Not doctors, not even priests become as intimate with patients as nurses. Nurses have got to come to grips with the deep philosophical concept that carrying someone else's shit is a privilege."

"Nurses have got to be clear that we are still the ones ultimately responsible and that we are always available to do things for our patients. If I become too posh to wash I should no longer be in the profession."

Janet Clay, a nursing sister in accident and emergency unit in Newport, South Wales, said graduate nurses were the most likely to consider themselves above basic treatment.

"There is a lot of attitude that: 'it is beneath me to do the bed pans'. But that is what basic nursing care is about," Clay said.


Copyright © 2005 Reuters Limited. All rights reserved. Republication or redistribution of Reuters content, including by framing or similar means, is expressly prohibited without the prior written consent of Reuters. Reuters shall not be liable for any errors or delays in the content, or for any actions taken in reliance thereon. Reuters and the Reuters sphere logo are registered trademarks and trademarks of the Reuters group of companies around the world.
at May 07, 2007 No comments:

Email ThisBlogThis!Share to TwitterShare to FacebookShare to Pinterest
Labels: Reading

10 Things Idiots Do On Friendster

there is NO SUCH THING as a friendster
tracker.

it does NOT exist. so quit posting
stupid bulletins like

To the people who have like 25,000
friends,
are you serious?
You're stupid.
Go play in traffic.

Don't ever post pictures and say
"OMG, I'm so ugly"
"OMG, I'm so fat"
because if you were,
you wouldn't post them.
And if u do ur a freaking mongoloid.

Nobody cares about threats over the
internet.
Don't try to act hardcore with the
keyboard.
Fighting online is like racing in the
special olympics;
even if you win, you're still retarded.

Quit crying
b/c you're not on someones top 8.
who cares?
ITS FRIENDSTER!!!
Stop bitching!!!

Who really cares if
I don't accept you as a friend?
MOVE ON!!!
Don't send me another request or
message asking
"what's up with you not adding me?"
I don't want you as a friend,
that's what's up bitch!!!

Little 12 year olds who have Friendster
and look like sluts, and act like
whores
go somewhere else
because nobody wants you here.

If you have decided to read this,
you are a true Friendster Friend.
Real friends read their bulletins.

And if you open a bulletin and it says
something like
"repost this in 100 seconds or a ghost
will rape your dog tonight,or some
dead skinless girl is gonna rape your
mom"

QUIT BEING A DUMBASS


This is a test to see how many people
in your friends list
actually pay attention to you.