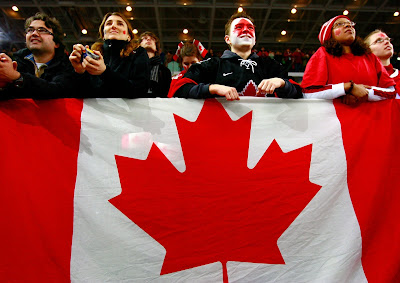 I should be doing my Nursing 170 paper right now but I guess I have to express how happy I am that CANADA WON GOLD IN HOCKEY!!!
Ok, I'm not technically a "Canadian" (I will be next year, yeay!). I was born in the Philippines but I live in Canada, I will grow old here in Canada, and I will probably die here in Canada. So basically Canada is my home and I love Canada. I share the passion and the pride that many Canadians feel right now.
I am not a huge fan of sports and I was never interested in hockey, but I support Team Canada and my country. I wasn't able to watch every event during the 2010 Vancouver Olympics as I had midterms and work but I really tried to watch the hockey game as everyone knows, hockey is Canada's game. It was very depressing the way Canada lost against the US during the pool play but in the end Canada was victorious and it just brought life in the streets.
I was driving downtown and all I could hear were people screaming in celebration and people waving the Canadian flag with pride. It was just crazy!
Anyway, that's about it. Go Canada!
By the way, I just wanted to share the Canadian olympic theme song "I Believe" which is sung by Nikki Yanofsky:

***
Photo Credits to Sarah and Tim
Video credits to puddlehooper25
at February 28, 2010 No comments:

This is an excellent description of what I am feeling right now. I just have too much to do and there`s just no time for it. I wasn't able to study for my midterms because I was flogged with papers and I needed to work so that I could pay off my car and credit card debts.So yeah, it sucks to be me.

I've been stressing out myself a lot lately and I've done several positive and active steps to fix this:
1. I quit my other job as a home care aid as my gas expenses was too much and I didn't like travelling to other people's homes.
2. I'm actually going to make a schedule and I'm actually going to follow it... I hope.
3. I'm going to adopt a carefree attitude.

When moving in to our new house the first thing that became a concern for me was how we were going to get our mail. My worries went away when I was told that Canada Post would just redirect all of our mail to our new address which is good.
We then started getting new mail after a few days. All went well except when we realized that our mail wasn't really safe as the mailman would just leave our mail at the door because we didn't have a wall mounted mailbox yet. All of our mail would be left in the front porch and we were afraid that the wind might blow our mail away or worst have someone stealing our private information.
This is where our need for wall mount mailboxes started. With a mailbox you are ensured that your mail will be secured under a lock and key. I saw these mailboxes that looked like vaults so talk about extra security. You can also be assured that your mail will be received even when no one's home because some shipping company will never leave your package in front of your home unless they consider it safe to do so.
Another reason that we wanted a mailbox is that it adds style and beauty to our home. There are a lot of styles and designs of mailboxes ranging from the classical mailbox design to those artsy modern mailboxes. I really liked the mailboxes at Mailboxixchange. They have a huge selection of residential and commercial mailboxes and you won't believe how reasonable their prices are.
I especially liked this wall mount mailbox that had a maple leaf design. This design is fitting as it showed how much we love Canada. 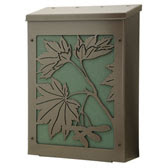 There were other awesome designs that caught my eyes too and they were just too beautiful to be used as a mailbox.
at February 15, 2010 No comments:

We all are familiar with the cliché, “Health is Wealth”. It just happens that this statement is fairly accurate and has been supported by a study done by unnaturalcauses.org. We were talking about the Social Determinants of Health at my Foundations in Health class and I just learned that there is a direct relationship between health and one’s socio-economic background. The documentary that we watched proposed that the higher your income is the healthier you are as compared to those with lesser incomes. What surprises me the most is that the reason why this phenomenon is occurring is not because the wealthier people can afford better health care (because in Canada everyone has equal access to health care) but because wealthier people has actually more control over their work and basically with their lives.
Let’s take for example the CEO of a company and a regular employee. The CEO can come to work anytime he wants, he doesn’t have to report to anyone, and he can basically write down his personal to do list without having to think about work or anything else interfering with his plans. The regular employees on the other hand have a lot of stress and face tremendous pressure in their job. They don’t have much control over their job and if they aren’t being paid enough, they have to worry about making their budget fit or if they will have a job the next day with the recession.
Having power to control one’s environment has huge impact on one’s health. But again, income isn’t the only main factor as race and culture will also play a huge part. It is said that if you belong to a minority, even if you have a very big income you will have a lesser level of health as compared to a Caucasian.
So if you want to be healthy, then be a rich white guy/girl. And as my teacher adds, if you are poor don’t be poor too long. It’s funny but this holds some truth in it.
at February 13, 2010 1 comment: