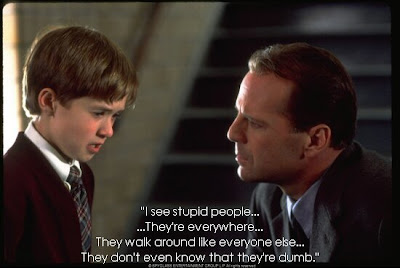 Ok my photo above has completely no relevance to what I am about to talk about in this post. I just wanted to place this photo to emphasize the word irresponsibility!

My stupid brother may be the best example of this term... he may as well be a new definition of IRRESPONSIBILITY! Imagine this, you come home from school and you find your mother early from work working hard on the computer. At first you might think that it's work related but then you suddenly realized that it's actually your stupid brother's school work/project when your mother asks you to help out.

I was actually quite taken back by this scenario because never have I asked my parents to DO MY HOMEWORK/PROJECT! I may have asked for help but I rarely do this. And guess what makes the whole scenario more aggravating? The projects are due the next day. Oh yes projects! With an S! My mother was doing several projects of my stupid brother.

These projects were given months ago and yet my very stupid and irresponsible brother decided to do it at the last minute. To think that these projects are his requirements to graduate high school.

I sometimes ask myself why my brother is such a bum. A complete good for nothing student who can't seem to get his act together! He was almost suspended for possession of marijuana, got mixed up with juvenile delinquents, got into fist fights (and almost into a lawsuit), and he's a below average student.

Why? What happened to him and he seem so aloof, carefree, and lax?! Doesn't he ever think of is future? What makes him act this way? I can really say that he has no reason at all to be such a bad student! He lives near his school, he's always given allowance everyday (so he has no problems regarding budgeting and all), he has a computer, and my parents are always there to help him out.

So why then am I better at him in school performance?! Imagine I lived independently away from my parents since high school, had to cook my own food, budget my allowance, handle daily stresses on my own, and I didn't have complete resources like a computer. He has everything given to him but why is he so damn irresponsible?

I have one hypothesis why he's like this. He's a SPOILED BRAT! He's so used to being given everything he wanted and he takes no responsibility for his actions. For example, he flunks a subject. Is that a problem for him? Of course not because my parents come to the school and influences the teacher to pass him. He gets into trouble? No problem, my parents are once again to the rescue. He does something wrong? No problem because my parents lets it go. He never gets grounded or punished... so look how this spoiled person turned out. A selfish self-glorifying fool!

I'm quite pissed of because I once remembered asking my mom a definition of a word way back when I was little and she then told me to find it in the dictionary. Fine it's to train me to be responsible right? But what's ironic is right now she's doing my brother's dirty work. So what is she trying to teach my brother now? Dependence?

I know that someday, my parents will realize their mistakes when it's already too late, when my brother becomes a jobless bum with several kids.
at March 05, 2008

Email ThisBlogThis!Share to TwitterShare to FacebookShare to Pinterest
Labels: Hear Me Complain and Rant, My Thoughts