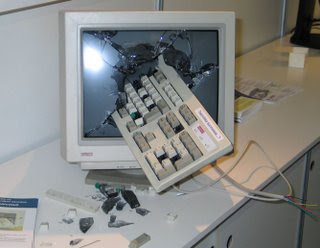 I don't actually hate computers. I just hate it when they break down! Our PC which we were supposed to sell wouldn't boot and keeps on restarting after the Windows XP logo appears. Grr! I have to do something about it when we return from Manila and Cebu. I have already contacted someone about it but that someone hasn't replied yet but I'm sure that there are several computer repair shops down town.

I could try fixing it myself but guess what? My darn Windows XP installer CD is missing! I hate it when some stupid people come meddling with my belongings and then fail to return it as it was. I was really stressed out when I couldn't find that darn CD.

What added to my stress was my loud-mouth father who has no knowledge about computers (he doesn't even know how to save for crying out loud!) and then here he goes why this happened bla bla bla. I wished that he would just shut up because it was my mom who I was speaking to as she practically owned almost everything in his old crummy house. He did not even own the computer so he had no right to lecture me about it.

God! Why don't they realize that sooner or later the computer does break down even if that darn computer cost a lot! Like relax people, all I need is another installer and that software problem will be as good as new ok? Or I could just send it to a computer repair shop and for Php 600 ($15) problem solved! So back off my case!

I swear I wouldn't meddle with computer system settings again!
at May 16, 2008

Email ThisBlogThis!Share to TwitterShare to FacebookShare to Pinterest
Labels: Hear Me Complain and Rant, Just Sharing, My Thoughts