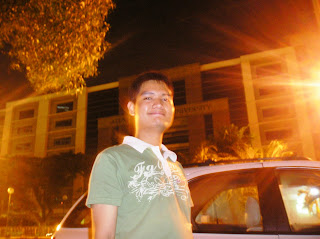 This picture was taken last month (November) and I really like this pic. it shows that I have actually achieved one of my dreams and that is to visit ADDU. I have planned to visit ADDU when I was in Davao for our psychiatric affiliation but I was only able to visit my sister school when I came back to Davao for our medical examination.

being infront ADDU was a sense of accomplishment for me. Don't get me wrong I am a true blue Atenean. I have studied at Ateneo since high school. And if only I could already take care of myself and live alone during grade school then I would probably be studying in Xavier University Grade School (Ateneo de Cagayan). There's a lot of pride in me hehehe. But I do love my school. That's a fact.

I was about to write about my Davao experience but it's too lengthy and I'm a lazy bum hehehe. Anyway I wasn't really able to enter the campus since it's already dark and we were only there to buy some Pomelo from the sidewalk vendors infront of the school hahaha. Like we stopped at the side of the road (you can actually see my tita's car in the picture) and the vendors came to us (imagine that). We then decided to go out because we wanted to taste which vendor's pomelo is good (it was already more like eating if you ask me). The vendors really opened pomelos and gave each one of us. We then ofcourse bought a lot because the vendors would lose a lot because they really opened their products for us. I had a picture of the trash we left behind infront of Ateneo hahaha I am so bad.
at December 26, 2007