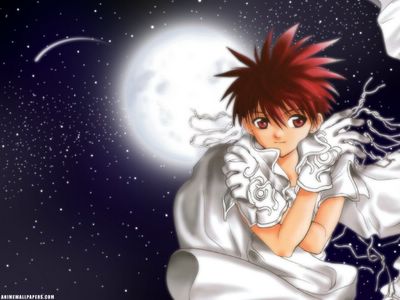 Niwa Daisuke. 14 years old, attending Azumano NO.2 Junior High. A pretty normal kid, nice, hard-working, a bit shy around girls.... At least, Daisuke would like to have people believe he's just a normal kid. Even if he couldn't pick locks with a somewhat uneasy skillfulness, or leap over high fences and traverse the obstacle course that is his home, Daisuke would be far from normal. Of course, you probably already know that Daisuke turns into the famous Kaitou thief Dark anyway, so Daisuke's lack of normality is hardly surprising. His mom has been training him up ever since he was a little kid so that he would be ready to enherit that which is the Niwa family "curse" (If you could call turning into a dark-haired bishy with wings a 'curse'...)

But one of Daisuke's big problems is love. That and the fact that one blonde haired-bishy is trying to kill him. He confessed his feeling for Risa, only to get knocked back, and then find out that she's fallen head-over heels for his alter-ego Dark. To make things worse, he starts to like Risa's twin, Riku, and while she does return his feelings, she has less than amicable feelings toward Dark. Ehe, trying to convince her that he and Daisuke are the same person is going to prove a little difficult -_-;... But despite Daisuke's problems he always tries to put on a smile or a brave face, and for all his spiky red-headedness, he's not some hyper genki kid. He has problems and he tries to deal with them as best he can, while not falling into a angsty gloom of despair. In other words, Daisuke is one mature but cute kid~
Vincent rules!
at May 31, 2006