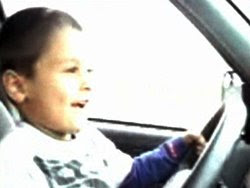 Most people would find this story funny but having a 7-year old driving a car at speeds of 70 km/hour is like having an unmanned aircraft crash land into your neighborhood.

Quebec Police sure didn't find anything hilarious with this incident. The parents and other family members in the Honda CR-V that the 7-year old was driving weren't wearing seatbelts so they could have been seriously injured or worst killed. Although they were driving in an old country road with no other motorists or people, a deer could have just darted out of no where and they could have all been badly hurt if the collision occurred.

Since the child is a minor and can't be legally charged, his parents face criminal charges and they could risk losing their son to child protective services.

There have been many videos of young children driving cars on busy roads on YouTube and one question runs through my head, "What are their parents thinking?!". That is if their parents were actually thinking.

There are already a lot of bad drivers on the road so I don't want to worry about drivers who can't even reach the pedals.