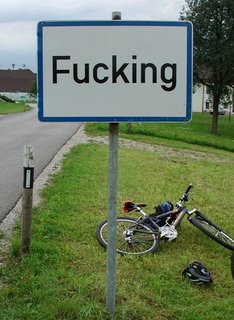 Fucking (IPA: /ˈfʊkɪŋ/—the "u" is pronounced like the "u" in English "put") is a small settlement (population c. 150), part of the municipality of Tarsdorf, in the Innviertel region of western Upper Austria, located at 48°02′59″N, 12°50′59″E, bordering Bavaria. [2] It is near the city of Salzburg. The village is known to have existed as “Fucking” since at least 1070 and is named after a man from the 6th century called Focko. “Ing” is an old Germanic suffix meaning “people”; thus Fucking, in this case, means “place of Focko’s people”. [3]

The name, spelled identically to the gerund form of the often-used English profanity “fuck,” is often found amusing by Anglophones. In German the name has no obvious associations, amusing or otherwise, although most German speakers are aware of the English word. The German equivalent of “to fuck,” regarded as equally vulgar to the English word, is ficken (IPA [ˈfɪkən]).

The settlement’s most famous feature is a traffic sign with its name on it beside which English-speaking tourists often stop to have their photograph taken. The sign is the most commonly stolen street sign in Austria.[4] Significant amounts of public funds are spent on replacing the stolen signs. In August 2005 the road signs were replaced with theft-proof signs welded to steel and secured in concrete to make the signs harder to take. [5]

On some photographs that can also be found through the Internet, below the sign with the name "Fucking" there is another sign with a picture of two children and the words "Bitte — nicht so schnell!" meaning "Please — not so fast!" Apparently this type of sign is a common reminder around the area for drivers to keep their speed down for the saftey of children, but the double meaning was found humorous to many of the german-speaking tourists. [6]

In 2004, owing to the stolen signs and embarrassment over the name, a vote was held on changing the name, but the residents voted against doing so.

Coincidentally there is a small municipality just over the border in Bavaria, Germany called Petting, which is a loanword meaning Foreplay in German.