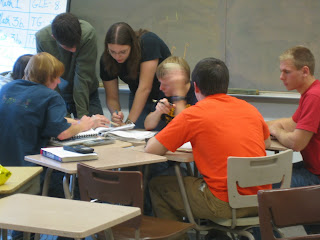 One thing that I hate (well more of dislike) about my current nursing classes is the great amount of time which is dedicated to group work. When in class, we have to form groups to discuss things, and when we're not in class we have to do group work.

I don't have anything against group work but I just dislike it because I'm a loner. I love to get things done at my time, on my terms, and in my way. I also dislike it when I feel alienated because people already had formed their own groups and there is nowhere for me to go.

There are pros and cons to group work. Lets start with the cons:

1. Group work alienates some people. People who knows each other flock together or people who have more to contribute to the group are basically chosen or wanted in a group.

2. Not everyone in the group contributes to the group work. What's worst is that they become more of a liability than an asset.

3. More people means more conflicting ideas or it may also mean, the more people, the less people there are who really does the work.

But there are also pros, which I will admit:

1. Forming groups will give you opportunity to get to know your classmates and thus help establish friendships and will make everything less awkward.

2. When everyone in the group actually contribute to the group project, all the inputs would sprout into a creative mass which would gain great marks and praise from the instructor.

3. There are times when having more people to solve a problem or do something is way easier than doing it alone. With more people you are able to divide and distribute the work so in turn the work load is manageable and less time is used to finish the project.

Well I did end up finding group mates who I like so let's take it from there.