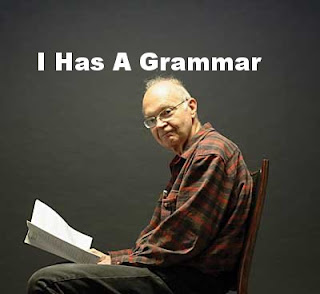 Holy Cow! I've been reading my older blog entries and I wasn't happy with what I saw. It brings me great shame to read my past entries as they were littered with so many grammatical mistakes, mistakes that would force the Grammar Police to lock me up and throw away the keys.
In my defense, I never proofread when I blog and I do not use the spell check on Microsoft Word like other people. Whenever I make posts, they are always a spur of the moment, so I never pause to organize my thoughts. If I did stop to think, I tend to lose my interest in writing the entire entry and my creativity goes to a standstill. Of course, just writing down whatever pops in my head has resulted to my numerous sentence fragments and run-on sentences.

Another huge mistake that I frequently make is using "but" to start a sentence. It just seems more natural for me to start a sentence with "but" as I always use "but" first whenever I speak. Don't even make me start with the infinite "LOL's" and "hehehe's" on my posts. I was still a kid then, a kid who wrote entries only for himself and never considered writing for an international audience until now.
I also have to admit that I tend to use highfaluting words, even when I don't know it's meaning, just to make people think I'm smart. I also use so many idiomatic expressions and it only causes more confusion for the reader because it makes me beat around the bush.
From now on, I'll be more careful when I post blog entries. I will always proofread them before I post them so that I won't look like a clown. Although my blog entries are considered casual writing, making sure that I write according to the standards of the academe would benefit me in the long run.