Artists in the Making

I was never enthusiastic about the idea of studying art and all but once I had started thinking and creating what we call art I finally realized that art is not that bad.

But I don't work alone, I have a group called "Naning" short for "Naningkamot" or meaning trying our best. None in the group is a professional artist or excel in drawing or paintng but we each played a part in conceptualizing to create a masterpiece.

Here are some of our latest work: 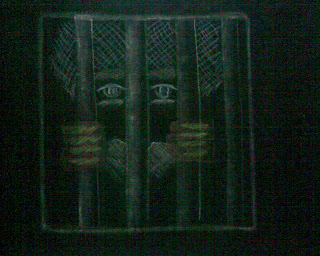 Selda is a paintng about a man who was wrongfully accused and thrown into jail to serve his life-sentence. If you would notice the man's eyes, it is the eyes of an innocent man who is saddened and who is suffering in his current situation. He wants to break free but can't.

This painting could also symbolize our potentials that we don't want to be tapped or prevent from being tapped. For example, we can sing well but we constantly put ourselves down and think negatively so the outcome would naturally be a failure. 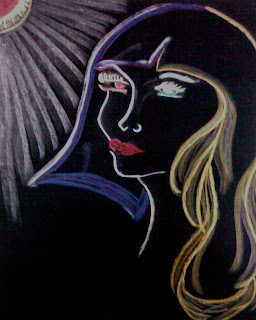 "FACADE"
Facade is about a girl who is naturally kind and good-hearted but because of a society (as symbolized by the sun) that is chaotic and complex she must wear a mask to serve as a defense mechanism. In this modern society, if you show your self as someone weak and defenseless people will naturally take advantage of you and manipulate you. That is why the girl is trying to convey a strong image so that she won't be taken advantage of.

Man is intrinsically good but in a society where evil is more dominant, the people in that society are more likely to adapt to survive. They adapt by being more defensive and selfish... self-preservation. 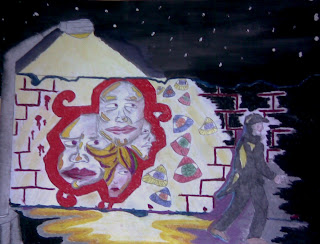 "CRIMINAL MIND"
This painting symbolizes a corrupt society where the government officials are working together with drug lords and prostitutes and other evil elements (as symbolized by the 4 heads on the wall). The time setting is during the night time because this is the time of the day where most evil elements (drug pushers, stealers, etc) work. The man who is about to step into the darkness symbolizes the innocent people who are about to die or about to be used by the politicians or drug lords to do their dirty work. The wall symbolizes the current situation of society, destroyed and stained by blood due to many people dying. The triangular eyes represent the media and society who are either apathetic, too coward to unveil the truth, or the media who exaggerate things making the current situation worse.

The starry night sky is a glimmer of hope because the stars symbolize people who are willing to do everything that they can to change the current situation of society.