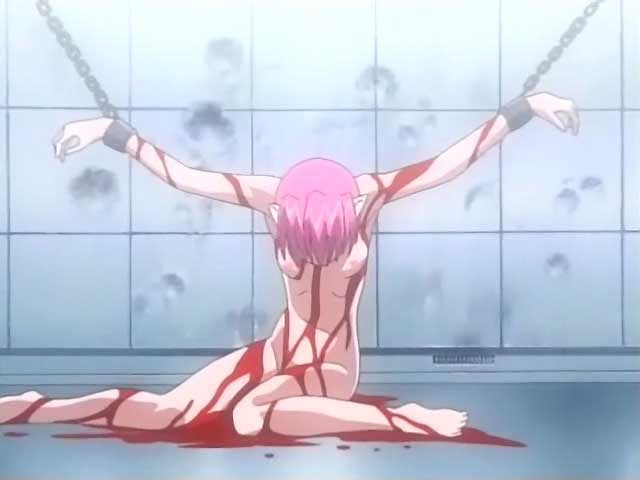 Damn Elfen Lied is so cool! I just love the blood and the bodies being sliced to pieces! And the plot is pretty good too! Plus it has nudity people, lol. It’s like a twisted love story… with supernatural powers and stuff… This is another classic example of how man’s heartlessness and abuses especially to the people who are tagged as “different” comes back at them with a full blow. I can’t blame the diclonius for killing without mercy after all the torture and emotional trauma they went through… but to know more about Elfen Lied just read this:

The story begins with a naked young girl named Lucy escaping under odd circumstances from an insular research facility off the coast of Kamakura in the Kanagawa Prefecture of . Lucy manages to nonchalantly dismember and slay a fair number of the staff and guards with a form of seemingly supernatural power and gets outside. A sniper is seen trying to shoot her, only managing to ricochet a bullet off her metal helmet. Lucy then falls off a cliff into the sea, bleeding from her head but ultimately surviving and evading the research staff.

Lucy is not a normal human but rather a diclonius: a mutant variant of humans with two small horns on their heads (hence the name diclonius) that resemble cat ears. The diclonius race possesses telekinetic powers through use of their "vectors", invisible arms that they control with a number and length of reach depending on the diclonius.

The day after Lucy's escape, a boy named Kohta arrives at to meet his cousin Yuka. Kohta has come to study at the local university and has been given lodging at an old, family-owned inn, the "Maple (楓, Kaede) ", provided he acts as the caretaker. After meeting with Yuka, they go for a visit to the beach and find Lucy washed up on the shore, still naked and bleeding from her head. The head trauma Lucy experienced causes her to develop a split personality. In stark contrast to the cold and sadistic Lucy, this personality is completely docile, harmless and is incapable at first of saying anything other than "Nyū". Not knowing what to do with her, Kohta and Yuka take her back to the inn to look after her and name her "Nyū". Yuka quickly decides that it will be best that she also live at the inn.

Kohta, Nyū, and Yuka begin settling into their life at the inn and Nyū begins to dredge up painful repressed memories from Kohta's past. Meanwhile, the researchers from the laboratory where Lucy was held begin searching for her, dispatching both human and diclonius agents to hunt her down.

Email ThisBlogThis!Share to TwitterShare to FacebookShare to Pinterest
Labels: Anime