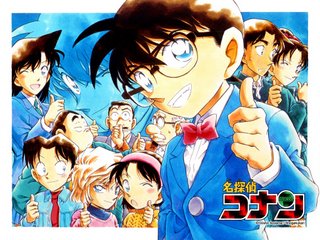 I haven't started watching this one...It has 81 episodes and I am running out of memory in my harddrive!!! Stupid computer!!! I'm erasing asmuch trash as Ican so that I can accomodate this beauty in to my computer... I have toreturn the DVD tomorrow to once again...the great Jade. Well I party own it...we both do but I'll allow her to keep it because she unselfishly lent me her HunterXHunter: Greed Island DVD (which I haven't returned yet... hehehe...).

So what is Detective Conan all about? Here's a short summary:

I'm really going to be busy this sem-break watching anime!!! Hmm...but I guess I stil lhave tocome back toschoolin the middle ofsem-break to serve my 4 hours extension!!! No! 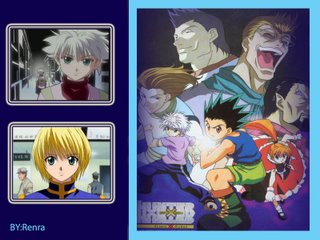 Blah, blah, blah... I urge you to watch it so you'llshare with me the ecstacy of HunterXHunter!!!
at October 10, 2006 No comments:

I'm the Worst Student Ever

I am proud tosay that I am the most irresponsible student in the world! I had my finals in organic and biochemistry this morning and I didn't even study! Well I did study the 2 days before the exam but I did not study as in study... I relied too much on the fact that the exam would only be multiple choice and there won't be any structures and the like.I did not memorize anything at all! I simply skimmed throught the book!

The cool part about this is that the testwas incredibly easy! I'm so sure to pass it! Hehehe... let's just see the results... buhuhu... but honestly... if it wasan objective type of exam... I would have met a fate worst than of failing.... I would fail yes... but I would fail because I have nothing to answer at all... huhuhu...

I do have a Religious Studies exam tomorrow (the last of my exams...) but I still haven't studied and look at the time hehehe... I'm such an exemplary student... JOKE!!!

Oh well... I'll just think positive! Do you think I'm being TOO POSITIVE already that it already became NEGATIVE?! Hmm... the complexities of life...
at October 10, 2006 No comments:

I will surely miss Ma'am Jasareno, she is such a great loss to the XU - College of Nursing... but what can we do, Ma'am Jasareno has to go back somewhere (confidential) to continue her awesome job as a researcher.

Ma'am Jasareno is perhaps the kindest and most loving and even motherly advisor that I had ever met in college. She's the only teacher in college that never aims to degrade your self-esteem but instead lifts you up on a pedestal so you can look at yourself with dignity and pride. No, Ma'am Jasareno is more than a mere teacher... she was a mentor...forming our young minds and forming our attitudes... we arereally empoweredunder her wings.

Ma'am Jasareno is a symbol of credibility and all out generosity... Buhuhu... I'm really getting so sentimental...

My last words for Ma'am Jasareno... she's so incredible! She's my role-model from now on hehehe!
at October 08, 2006 No comments:

On Homosexuality and Bisexuality...

I onced asked someone if he knew that it was a sin to have homosexual relations with another man. It has been frequently taught in my Religious Studies classes and church that homosexuality and even the now very common bisexual guys are big sinners. They say that it is unnatural and simply wrong.

Going back to the guy who I asked the do you think that you will go to hell question, I was deeply disturbed and even confused with what he said. He told me that it wasn't wrong to love so it wasn't a sin.

I was quite made aghast, yes, but he did quite have a point. The thing is that that kind of love is pointless. Why can't the homosexuals and bisexuals admit that they are only after easy sex that is why they engage in these deluded acts.

Homosexuals are incapable of loving and so I said... But according to a psychology study this statement is a big fallacy. Does that mean that homosexuals can love someone of the same sex?

This is quite a controversial topic. Why am I even talking about it? Hmm...